With commitments up 22.5% vs. a year ago, and the solid buying activity seen during January, signs point toward another record shipping month for February. 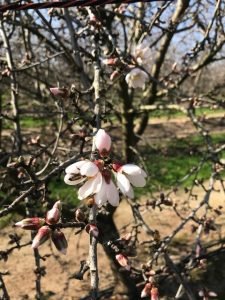 The bud set and now bloom continue to look great.  Pictured here are Monterey just opening and Sonora much further along.  This is an early bloom.

Bees:  While the bee situation in California is good, there are reports of increased colony health issues on bees coming from out of state.  Gene Brandi, local beekeeper and president of the American Beekeeping Federation, says the lower availability of bees is evident in just the past few days by the large number of calls from growers looking for extra hives.  With the excellent bee weather, this is unlikely to be a big factor this bloom.

Water:  Reservoirs remain at historically good levels.  Though as reported by the Mercury News, “the Sierra Nevada snowpack, the source of one-third of California’s water, is at just 24 percent 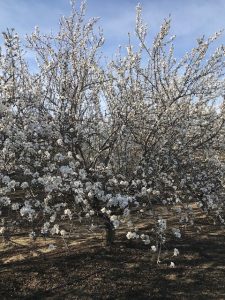 of historic average.  Lack of storms, and hot temperatures have put it at levels last seen during the drought.”  Looking at the chance of recovering to a normal winter this late, they quoted Bill Patzert, who worked for NASA for 35 years, as saying “there’s a reason they call it a Miracle March, that’s because it doesn’t happen that often.”

Water Costs are increasing as a result.  The federal districts aqcquired supplemental water from other districts at USD 450 per acre-foot (AF).  This is double the cost of the 2017 season but still below the extreme highs seen during the drought.  For growers taking water for deliveries starting March 1, the cost will be $450/AF plus water district conveyance fees reaching about $500/AF.  Growers in federal districts will spend about $1,500 to $2,000 per acre for water, or the equivalent of about $0.70 per pound of almonds grown.

Crop Receipts during the month of January were less than January 2017, pointing toward a crop less above the NASS estimate than some of us were thinking a month ago. 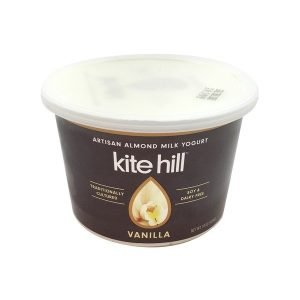 Consumption is robust as almonds are the cheapest tree nut, and fit into the major food trends whether it be high protein, plant protein, gluten free, etc.    Almond milk’s global success has opened up new categories with almond yogurts, ice creams and cheeses providing great opportunities for consumption growth.

Tight Transition:  Assuming a crop of 2.274 billion (2.228 marketable) and the industry maintains the YTD 10.3% growth, shipments would be 2.318 billion lbs., leaving a carry-out  in the range of 308 million lbs.  As a percentage of shipments (13%), this would be the lowest ince 2006.  Even 350 million lbs. carry out would make for a very tight supply of specific sizes and qualities during the transition period.

We will see how the impacts of good bloom weather and tight supply play out in the market.

The Almond Board of California released the November 2021 position report   Shipments...

The Almond Board of California released the October 2021 position report   Shipments...

The Almond Board of California released the September 2021 position report   Shipments...