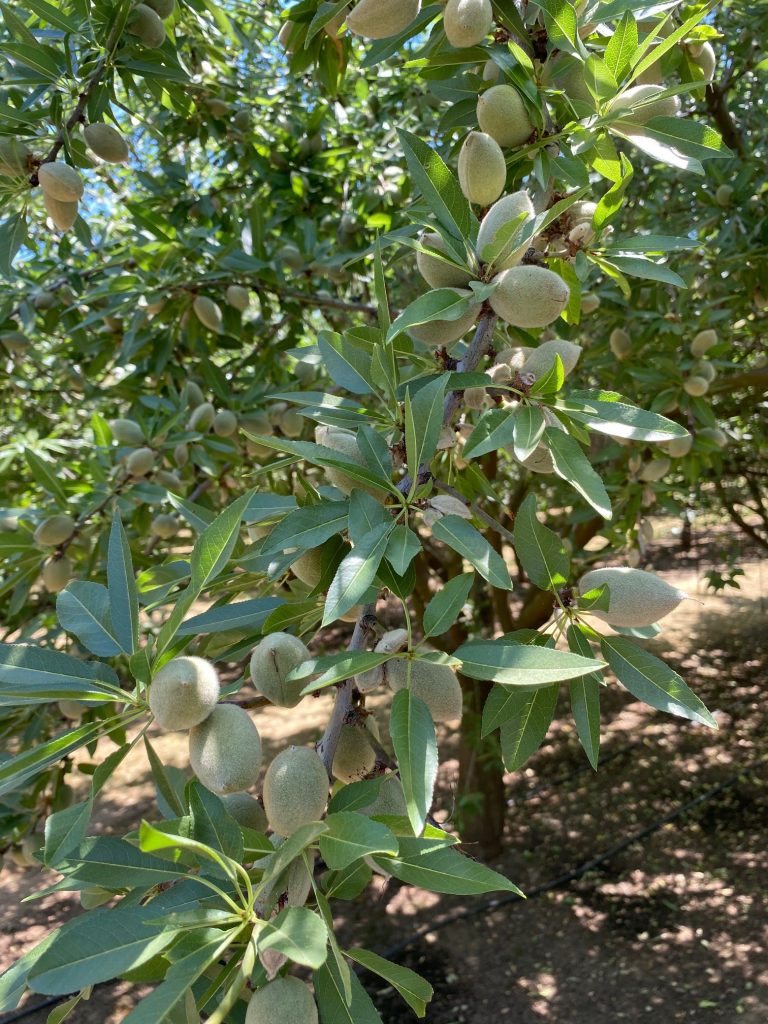 Crop Receipts per reporting to the Almond Board stand at 2.534 billion lbs.

3.0 Billion lbs. is the subjective forecast.  That’s based on 2380 lbs/acre. on 1.26 million acres.  It is forecasting yields of 10.2% up from 2019 and total production 17.6% up.  This is based on a telephone survey of 500 almond growers.  NASS Noted “The 2020 almond crop experienced a dry February throughout most of California, providing excellent bloom conditions and plenty of opportunity for pollination. Mild temperature eased concerns of frost damage. There were some isolated storms in late March and early April that brought inches of rain and even hail to some areas, but there were no reports of significant impact to the developing crop. With more days of sunny weather, growers have been busy in the fields applying fertilizer, irrigation, and weed and pest control measures. Expectations of higher than average yields were reported across the state. Coupled with a large increase in bearing acreage, the 2020 crop is estimated to be the largest on record.”

April Shipments were a record 181 million lbs. – inline with expectations

Uncommitted Inventory is 440 million lbs., up 16% from a year ago

Sold Position:  The industry is approximately 84% sold on total supply, similar to a year ago

Three billion lbs. would be a large increase and brings a bit of a bearish sentiment to the market.  However…

Grower Resistance to lower prices is real, as current pricing is around 20% below what we estimate as average production cost and down $1/lb. from the high’s of the 2019 season.  It is tougher even still for some federal district growers as supplemental water Costs are up to 500 to 900/foot for many growers, equating to an additional 50 cents or so in growing cost.  Growers were not supportive of prices even before the NASS estimate was released today.

Coronavirus Impact:  The perception is that the largest impact of on the market remains the temporary shut down of India, where large volumes are at the port.  The low April shipments to India (-46%) should be taken as a positive there.  Dubai has experienced similar closures / issues though on a smaller scale.  Other Middle East markets like Turkey seem to back buying in a major way.  Some retailers in the US and Europe have reported large increases in almond sales as a result of shifting consumer habits.  While the perception is that the India situation is the biggest impact from COVID-19, it’s possible shifting consumer habits in established markets could favor almonds in ways that are more meaningful, but it will take time to know.  Increased demand for some cheaper snacks like peanuts, sunflower seeds, and popcorn have been reported to be massive, and other products more dependent on food service are suffering considerably.   The meat industry’s issues with pricing, availability, and declining public perception, could potentially further boost sales of plant-based proteins.  Almonds may benefit from the shifting consumer habits while also potentially suffering from a worse global economy and reduced consumer spending power.

2021 Crop potential is likely reduced on a per acre basis as the state has never done 2 crops back to back with these kind of yields.  Additionally, with grower prices like we’re seeing today, the industry anticipates increased removals this winter and bearing acres are likely to grow considerably less than we have seen in recent years.

RPAC’s co-founder Ned Ryan recently remembered back to 1976 when the crop was estimated at 280 million pounds, and they were all so afraid of the thought of one day hitting 300 million pounds, and what were they going to do with all those almonds?  It’s funny looking back, but is not a joke, the fear was real.  It is like Groundhog Day, every so many years everyone gets fearful that we have over-planted almonds.  The skeptics have been proven wrong over and over because it is such a healthy product on the right side of global population and health trends.  Ounce for ounce, almonds have more protein than eggs, more calcium than yogurt, and is one of the highest concentrated sources of Vitamin E in the world.  Consumers are aware that almonds are healthy, but they don’t yet know how good they really are, and the demand growth will continue.

The crop should get consumed or most of it at least, the question is what price, and may there be a larger carry-out into a likely smaller 2021 crop and then things balance out?  At a roughly 30% discount from the 2019 crops average price, have prices gone down too far or not enough?   Also, keeping in mind that the potential demand shifts from COVID-19 are a major wild card and will need to be watched carefully.  As well, with crop estimates out there ranging from 2.714 (Bountiful) to 3 billion and in-between, the crop size is not a given either.

Stay tuned and read the 4th link below for more great health news.

May 7, 2020  By Mary Ellen Shoup.    A recent study conducted by researchers at Tufts University suggests that consuming 1.5 ounces of almonds per day, compared to no almond consumption, may help reduce CVD risk factors such as elevated LDL cholesterol levels, and as a result, reduce an individual’s healthcare costs associated with treating such conditions.  Click here for Full Story

The Almond Board of California released the October 2022 position report   Shipments...

The Almond Board of California released the September 2022 position report   Shipments...